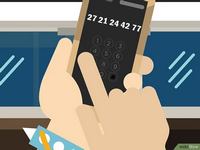 On January 31, 2021, Côte d'Ivoire will see its telephone number change to 10 digits. In fact, the 8-digit numbering currently used has reached the limit of its possibilities in terms of the number of numbers available (49,000,000).
The new numbering will provide 10 billion numbers.
So, at midnight, on the night of January 30 to 31, 2021, two more digits must be added in front of the current numbers. these two digits are determined according to the telephone operator that hosts the number in question.

01 in front of  MOOV mobiles

05 in front of MTN mobiles

07 in front of Orange mobiles

21 in front of MOOV landlines

25 in front of the old Arobase landlines, now MTN

27 in front of the old OCIT landlines, now Orange

So, should we spend the night of January 30-31 editing all the contacts on our lists?

This is what could have happened if an Ivorian had not thought about this problem.

Régis ANIMAN, because it is about him, is a young graduate of the French School of Computer Engineering (Supinfo Lyon). He found this subject to be a challenge and set to work. It resulted in an Android and iOS application called Contacts CI and which is available online.

To learn more about him, you can read this article about him.

How visitors come to us from Google